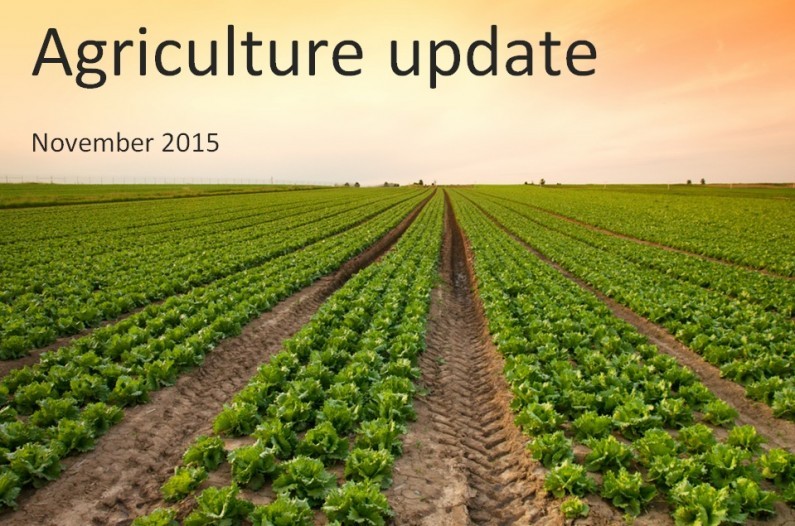 Welcome to our third agriculture update for UK farmers.

The Chancellor, George Osborne, last week delivered his 2015 Autumn Statement. The Autumn Statement did not bring much news for the agriculture sector, however, there was an important announcement regarding DEFRA.

We have prepared an agriculture Autumn Statement 2015 review here.

Although an increase in output (milk production from April to mid-October 2015 had grown to 732m litres above the long-term average) has resulted in increased dairy price competition, the ongoing supermarket price wars, in particular, have left many dairy farmers on the brink of closing. Dairy producers are now receiving just 60-70% of break-even milk price of 28-30p per litre and, according to The Dairy Group, are facing a total loss of 4.1p per litre in 2015/16.

The NFU Horticulture and Potato Board have also reported that supermarket price wars are pushing UK vegetable and fruit growers to cut production whilst imports reach record levels. The value of UK field vegetable production fell 14% between 2010 and 2014 and outdoor cropped areas fell by 7,000ha. The volume of imported fruit and vegetables to the UK increased by 664,000t between the same dates.

A funding pot of £24m is available through Local Enterprise Partnerships for business development, food processing and small-scale tourism initiatives. Grants of £35k to £140k are available. One new job is required per £30k of grant.