Adding commercial value to your transaction

The Hawsons specialist tax and business advice teams have worked closely with Northampton-based Perrys on this sale.

Hawsons’ Tax Partner, David Cairns said: “We were delighted to have assisted Perrys, providing strategic tax and business advice, on their sale of their Land Rover and Jaguar divisions to The Rybrook Group. This was a significant transaction for Perrys, a long-standing client of Hawsons.”

Leading car dealership, Perrys, is the largest independent Peugeot dealer in the country. The Northampton-based firm, which has dealerships across the UK, is a highly successful, privately-owned business. 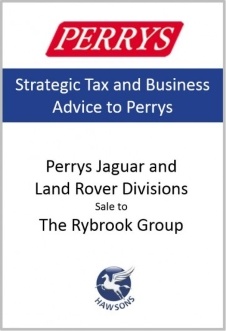