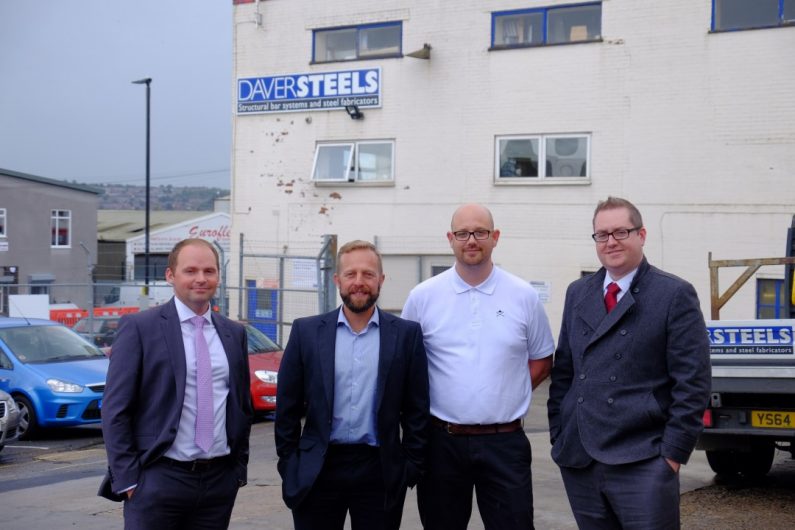 Sheffield based steel manufacturers, Daver Steels, has been acquired in a £1.2 million management buy-out advised by Hawsons and supported by NatWest and Finance for Enterprise.

The deal involves a combined financing package from Royal Bank of Scotland Invoice Finance and Lombard. The deal is setting the scene for Lee Stones, the business’s technical sales manager, and Robert Butts, the operations manager, to step into leadership roles in the company.

Sales at Daver Steels have increased dramatically in the last couple of years, from £1.8m in 2014, to £3.2m in 2016. They have also worked on the multi-million-pound Crossrail Project in London, where they have supplied hundreds of complex stainless steel structural support frames.

Lee Stones who has worked at Daver Steels for the past 4 years, said: “This is a new phase for Daver Steels, as we set out a fresh strategy for the company. We’ve achieved a significant amount of growth over the past four years, boosting revenues and taking on some high-profile projects. Our aim is to build on that by targeting a turnover of £5m over the next 12 to 24 months.”

Jack Ware, part of the Corporate Finance team at Hawsons said: “It was a pleasure to work with Lee, Rob and the various funding partners seeing this MBO through from inception to completion.

Lee and Rob have an ambitious strategy to build on the company’s recent growth in turnover and I look forward to seeing the business continue to flourish under their management.”

Mike Gregg, from Finance for Enterprise, who assisted in funding this transaction also commented “The government backed Start Up Loans scheme is available to individuals looking to start or grow an early stage business. Loans are available up to £25,000 per applicant over a maximum of 5 years.

Finance for Enterprise were delighted to work alongside the team at Hawsons and be part of this transaction involving a long-established Sheffield business.

We wish Rob & Lee every success for the future.”

The government have announced a delay to the roll out of tax free childcare which was expected to be fully implemented by the end of the year. From 24 November 2017 the service is available to parents whose youngest child is under 6 or who has their 6th birthday on that day. Parents can apply online through the childcare service which can be accessed via the Childcare Choices website.

In April 2017, HMRC started rolling out the childcare service via a single website through which parents can apply for both 30 hours free childcare and Tax-Free Childcare. The roll out started with parents of the youngest children first. HMRC acknowledge that over the summer some parents didn’t receive the intended level of service when using the website and that they have subsequently made significant improvements. For those parents who have had difficulties in accessing the service, compensation may be available: see childcare service compensation.

Over the coming months, HMRC will gradually open the childcare service to parents of older children, whilst continuing to make further improvements to the system. HMRC hope this strategy of managing the volume of applications will result in prompt eligibility responses when parents apply, with ‘almost all parents receiving a response within five working days, and most getting their decision instantly’.

Tax-Free Childcare is the new government scheme to help working parents, both employed and self employed, with the cost of childcare. For every £8 a parent pays in, the government will pay in an extra £2. Parents can receive up to £2,000 per child, per year, towards their childcare costs making a total amount of £10,000. Higher limits of £4,000 and £20,000 apply for disabled children.

To qualify for Tax-Free Childcare parents and partners in the household must generally meet a minimum income level of on average £120 a week and each earn less than £100,000 a year.

The scheme will eventually be available for children up to the age of 12, or 17 for children with disabilities. Those eligible will be able to apply for all their children at the same time.