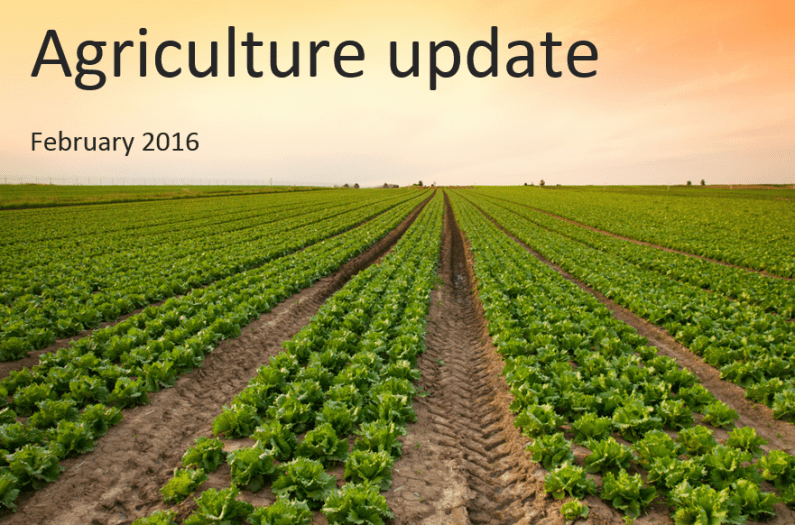 Welcome to our first agriculture update for UK farmers of 2016.

A British exit from the EU?

What would a British exit from the EU mean for UK farmers? Leading economist, Professor Buckwell, suggests that an exit could deliver long-term benefits at the cost of a short-term hardship. However, the long-term gains would depend on the legislative and policy environment that replaces the CAP and the industry’s competitiveness.

Some form of direct payment would also have to come from the UK government, but what form is not yet known of course. An EU exit could be a wake up call for the industry and a catalyst for change.

Farm minister George Eustice is backing the EU exit campaign, putting himself in opposition to DEFRA secretary Liz Truss. At the NFA annual conference in Birmingham Mr Eustice outlined fledgling policies, suggesting the possibility of retaining an area payment together with accreditation schemes. He suggested that concerns over the level of agricultural support in a Brexit were unfounded.

Liz Truss, however, suggested that a vote to leave the EU was a leap in the dark. She pointed to the size of the single market and the ability to export products freely without trade barriers.

The Yorkshire Agricultural Society has also outlined some potential disadvantages of an EU exit:

Labour – Labour availability may be reduced, particularly in soft fruit and horticulture.

Trade – Trade agreements, tariffs and subsidies will have to be negotiated. Farming may be overshadowed by other sectors.