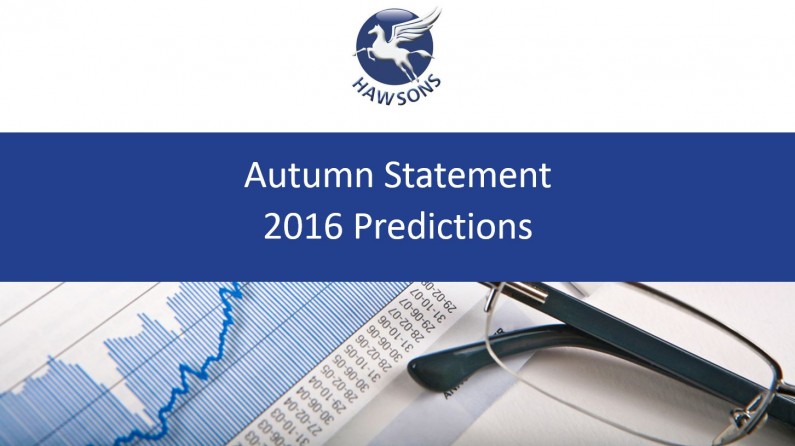 The Autumn Statement 2016 on Wednesday is set to be an important event.  It will be the Chancellor’s first opportunity to outline his plans for taxes & spending in the wake of the Brexit vote.

But what tax changes can we expect in the upcoming Autumn Statement?  Craig Walker, tax specialist at Hawsons, gives us his predictions:

The Chancellor has said that his first Autumn Statement will “set out a plan for guiding our economy through this period, and preparing it for the future after we leave the EU”.  He will reportedly announce broad direction and funding, but leave more policy announcements to his colleagues.

The Chancellor added “We need to raise the overall productivity of the economy to the level of the best by investing in the infrastructure, the R&D, the skills and the innovation that will enable us not just to survive, but to prosper on the world stage”.  He said that the UK economy has to be “match fit” after the Brexit negotiations.

Mr Hammond has stressed that any fiscal boost in the Autumn Statement will be careful, considered and targeted, and designed to help the UK to cope with the turbulence of leaving the EU.

Mr Hammond has described the UK’s debt as “eye-wateringly” large and has promised that he will not leave the burden of debt to future generations.   However, he is set to adopt a more flexible approach to the deficit amid economic uncertainty following the Brexit vote.

The Chancellor has indicated that the Government will no longer target a budget surplus by 2020.  He is expected to push the deadline for eliminating the deficit well into the next Parliament.

The Treasury has said that the Autumn Statement will provide “targeted help to ordinary working families”.

Teresa May has been pushing for Mr Hammond to send a strong signal that the conservative government will take action to help families that are “just about managing”.  This key voter group, referred to in Whitehall as “JAMs”, relates to the six million households with net incomes between £12,000 and £34,000 a year.

The Autumn Statement is expected to free up some money to provide a boost to these people on modest incomes.  The Chancellor has said that he aims to share the prosperity across the country and across the income distribution.  It has been rumoured that policies to reduce the burden of childcare costs could also be announced in the Autumn Statement.

The Chancellor is under pressure to soften £3.4 billion cuts to Universal Credit and delay £30-a-week cuts to disability benefit Employment and Support Allowance (ESA), due to take effect from April 2017.  However, the Chancellor has given little indication that he will reverse the proposals.

There is likely to be some change in the area of personal tax, particularly as the government has indicated that it is committed to re-balancing wealth.

We should expect some news on corporation tax, as part of a government strategy to ensure that the UK remains a good place to do business following Brexit.  However, the new Chancellor has indicated that he will not cut the rate of corporation tax to as low as 15%, dismissing Mr Osborne’s plan as just a suggestion.  He has instead indicated that he intends to stick to the Government’s plan to cut the rate to 17% by 2020.

We are not expecting any major changes to the rates of capital gains tax.

There could be some fiddling around the edges with Entrepreneurs’ Relief with a possible tightening up of the qualifying conditions.

At the height of the financial crisis, VAT was slashed temporarily in order to boost growth and the Chancellor could seek to make a similar rate cut.  It is predicted that the Chancellor will hint at cutting VAT from 20% to 17.5%, however with customer confidence seemingly solid the Chancellor seems more likely to keep this up his sleeve until next year’s Budget.

The Autumn Statement may provide an update on the Government’s proposals to introduce inheritance tax on all UK residential property, regardless of the residence of the owner or ownership structure.

In addition, inheritance tax reliefs cost more than £20 billion so may attract attention from the Chancellor.  We could see the Chancellor introduce a cap of the value of IHT reliefs such as Business Property Relief.

The Chancellor may offer some clarification on NI rates for self-employed people when Class 2 contributions are scrapped from April 2018.

Mr Hammond could also announce consultation on moving towards combining income tax and National Insurance, but there is expected to be no change for at least five years.

We expect an update on HMRC’s Making Tax Digital project in the Autumn Statement.  This relates to the project to move to a fully digital tax system by 2020.  You can read our article on the proposals here.

There are calls for the Chancellor to scrap the state pension triple lock which ensures the amount of state pension pensioners receive rises each year by the highest of price inflation, earnings growth or 2.5%.  Critics claim it is no longer needed or affordable.  It seems highly unlikely that Mr Hammond will make any changes in the short term, but he may well launch a review into the matter and a consultation on what could replace the triple lock.

Major changes in pension tax relief are unlikely but there could be some fiddling round the edges with changes to the Annual Allowance and Lifetime Allowance.

From April 2017 landlord tax relief for mortgage costs will be phased out.  It seems unlikely that the Chancellor will reserve the restrictions before they come into force, although a similar tax policy has just been scrapped in Ireland.

There are calls for Chancellor to scrap the stamp duty surcharge on second properties, in light of the slowdown in the housing market and lower than predicted tax yield.  However, the Chancellor has given no indication that he will seek to reverse this.

There are likely to be tax incentives to encourage saving, however so far the Chancellor has given very few hints.

It has been rumoured that the Chancellor could scrap the new Lifetime ISA which is due to be launched in April 2017.  Critics have argued that the new LISA risks undermining the Government’s auto enrolment initiative which is seeing millions of workers being automatically enrolled into workplace pensions.  In addition, several major providers have said they won’t be ready to launch in April.

It has been suggested that the Chancellor could scrap all six of the current ISA brands and move forward with just one ISA product, with a Help-to-Buy Government bonus on the first £4,000 of savings.

The R&D tax incentives are likely to be increased. Mrs May has said “We will also review the support we give innovative firms through the tax system…because my aim is not simply for the lowest corporate tax rate in the G20, but also one that is profoundly pro-innovation”.

The government are proposing to restrict the tax and national insurance advantages of providing benefits in kind through salary sacrifice arrangements.  Salary sacrifice typically involves an employer buying a personal item for an employee in exchange for foregoing part of their salary.  It is anticipated that the Chancellor will give some clarification on these proposals which are due to have effect from April 2017.

Hammond is likely to announce that pensions, childcare, bikes and other equipment for cycling to work will continue to be eligible for salary sacrifice.  However, any other items such as mobile phone contracts, computers and gym memberships will no longer be allowed to qualify.  There is likely to be some transitional protection for arrangements already in place.

The Chancellor is expected to scrap a planned 2p rise in fuel duty.

The Autumn Statement could see the announcement of new tougher measures to tackle tax avoidance.

This article comes with the usual disclaimer regarding all rumours and predictions: they should not be considered fact until they have been uttered by Mr Hammond himself.

Our tax specialists will be watching the Autumn Statement on Wednesday (23rd November) and providing live commentary as it unfolds.  To pick up on our commentary, follow us on Twitter (@Hawsons) or LinkedIn.